All About Scott and Paul!

Scott Burkell and Paul Loesel, a musical theatre writing team, have been working together for a long, long time. It all started when fortune threw them together at a summer stock theatre back in the 90's (yup, that long ago). Scott was an actor in the company and Paul played piano and was music director for the after show cabaret. They weren't really friends. They liked each other and all and had a mutual respect for one another but they really didn't hang out together. Well, one day Scott had this urge that he'd never really had before to write a song. He knew that he couldn't do it alone and needed someone to set his blossoming thoughts to music. He approached Paul and the exchange that occurred between them went something like this:

Hey, how are you?

SCOTT:
Fine. Do you want to write a song with me?

Yup, that was it. Short, simple, the beginning. The song they wrote was by their own admission "one of the worst songs ever ". It was called "Actor's Pet Peeves" and basically it was a formless, wandering, repetitive, 12 minute harangue chastising audiences for all of their bad behavior (you know, unwrapping candy, talking, asking silly questions etc.). It was performed twice in the theatre's cabaret to a rather confused response. The audience had basically been spanked for 12 minutes and weren't sure how to react. The song was put on the bottom of Scott and Paul's trunk and lives on only in legend. The important thing was that a team had been born. Both of the guys lived in Manhattan and when the summer was over they found themselves creatively entangled again. Having written a song, and an epic song at that, the next logical step for Scott seemed to be tackling a book musical. He approached Paul and the exchange went something like this:

SCOTT:
Hey, how you doing?

SCOTT:
Fine. Do you want to write a musical?

And that was that. The guys started work on what would become their first book musical titled "Six of One". They refer to it now as their "training wheel musical". It was the musical that they made mistakes on, ripped apart and rewrote over and over, but most importantly it provided them with the opportunity to learn how to work with one another. The musical was accepted into the ASCAP musical theatre workshop, received a Jonathan Larson grant, had many readings and ultimately was produced by CAP21 in a fully staged workshop in 2004. In the meantime the guys continued to write cabaret songs which they performed in their own original shows, "Love Songs and Other Crap" (which was MAC nominated) and "Hairless and Ripped" both done on the stage of New York's Don't Tell Mama. Their songs started to be recorded too. Firstly their "A Sorta Love Song" on Lisa Richard's CD "Virgin Tracks" followed by "Natural Order of Things" and again "A Sorta Love Song" on Marin Mazzie and Jason Danieley's CD "Opposite You".

Fate came into play when one of Scott's good friends gave him a book, Mark Dunn's "Ella Minnow Pea". The title reminded Scott's friend of a particular song in "Six of One" where a character references the alphabetical sequence, "lmnop". The book went on the shelf in the "to be read" section. Then a particularly dark day arrived when the guy's got news that an idea they had for their next musical had just been usurped by a well-established theatre writer. It seemed like maybe the universe was saying, "hang it up, this writing thing just isn't working out". Depressed and beaten Scott went to the shelf and picked up "Ella Minnow Pea". He started reading: the characters grabbed him, the story compelled, the plot sang! This was it! This book was crying out to be musicalized. Scott gave it to Paul and waited anxiously for word on whether it would have the same inspirational effect on his partner. You see, they had looked at many a story, many a book to adapt and had never been able to agree. But Mark Dunn's "little fable" proved to be the tale the guys were looking for. They agreed! They would turn this book into a musical! But how? Well, after a bit of junior sleuthing the guys figured out where Mark lived and sent him a letter. Mark, graciously agreed to meet and the three had coffee together. Long story short: Mark heard their material, liked it, lawyers got involved (that added a year, no lie!) and finally work was started on "Ella Minnow Pea" the musical.

The musical, after readings in New York, had it's premiere at the University of Michigan in the Fall of 2008. Now titled, "LMNOP," an NYC Lab production happened next, directed by Joe Calarco and starring Lilli Cooper and Rebecca Luker. In 2013, the show received a production with Goodspeed Musicals at the Norma Terris Theatre and then went on to its next regional developmental production at TUTS in Houston in 2015. Next up for the show, look for licensing opportunities through Samuel French! Our little Ella lives on!

The guys then went back to take a look at "Six of One". So much about the piece was good but they had never gotten it to exactly where they wanted it. After extensive rewriting during the spring and summer of 2009 "Six of One" reemerged, revamped and retitled: "The Extraordinary Ordinary". A reading of this new version was scheduled for the Fall of 2009 with a probable production in Houston to follow and then back to New York for a production in the Fall of 2010 planned. In the meantime the guys continued to write more stand alone songs which have been recorded, "Invention" and "Life Starts Clapping" (for which Paul set a poem by Hafiz to music: more on how the guys deal with "cheating on one another" creatively at another time*) on Stephanie J. Block's CD, "This Place I Know" and "Ohio, 1904" on Rebecca Luker's "Greenwich Time". The guys were also invited to be part of the prestigious "Broadway, the Third Generation" series on the Millennium Stage at Washington, D.C.'s Kennedy Center. The February, 2009 evening had Scott and Paul performing their songs with Stephanie J. Block singing and Alison Seidner accompanying on the cello. (You can see clips from that performance on this website and on youtube). The fall of 2009 saw the debut of Scott and Paul's musical revue, "Sorta Love Songs" at New York's Birdland. Their material was performed by a starry cast which included Marin Mazzie, Stephanie J. Block, and Jason Danieley. At present the guys continue to write and plan on starting work on a new musical soon (that is if they can agree on what that musical is going to be).

*Okay, a small sidebar, explaining how Scott and Paul deal with the issue of working with other writers. Early on in their collaboration Scott tended to write much faster than Paul. This was a source of frustration for the team and eventually prompted a perturbed Paul to suggest that Scott go and work with someone else while he caught up. Scott tried. He gave some lyrics to another composer, met with him, made plans and then felt horribly guilty and decided that he would rather just write with Paul, frustrations be damned. You see this composing team thing is a lot like a marriage and Scott just wasn't one to cheat. Paul however does have license to stray on occasion as long as he follows this one simple rule: he can only write with old dead poets. The pair are now content. 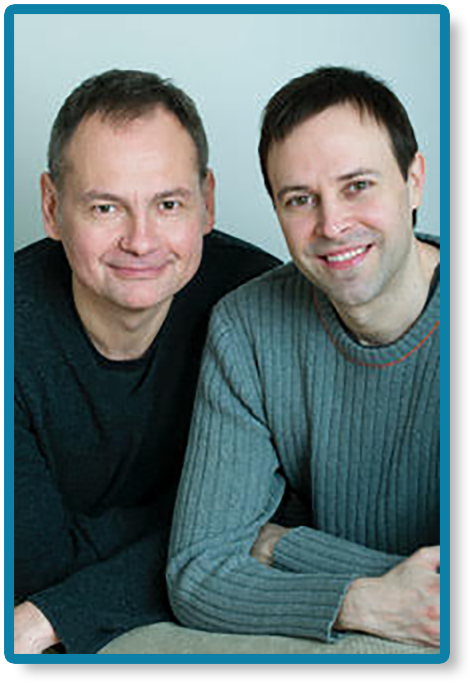